Thanks to Everyone Who Came This Weekend

Stepping Out (tales from Shelter and Beyond)


Funded in part by: a grant from the Phyllis C. Wattis Foundation 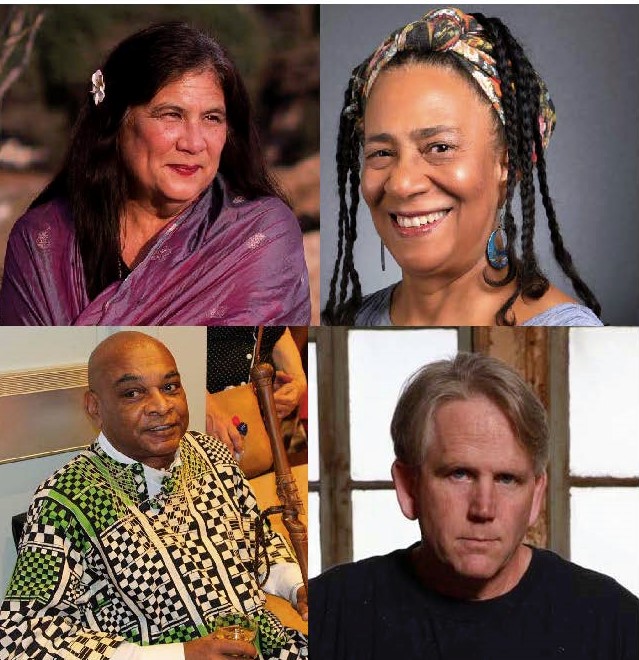 Stepping Out (tales from Shelter & Beyond)


This rendition of the Speakeasy Storytellers series features a luminary cast. Each was selected to do justice to this special outdoor event set against the sweeping backdrop of the Golden Gate. They are the current Poet Laureate of Alameda, Kimi Sugioka; San Francisco's Third Poet Laureate, devorah major; Moth Story Slam winner JP Frary and the Speakeasy Storyteller's founder and curator, L. Abdul Kenyatta. Each will read or ad-lib from their award-winning works and share the knowledge and wisdom they gained from sheltering-in-place (or not).


The Speakeasy Storytellers began in 2013 as a forum for storytellers celebrating the art and craft of story-making. Everyone has stories to tell. Stories have power. They delight, enchant, touch, teach, recall, inspire, motivate and challenge. They help us understand. Stories are related human experiences. Stories connect us and bridge differences. The Speakeasy Series supports themed and open-mike storytelling productions. Stories have been a primal form of communal messaging. Stories are timeless links to ancient traditions, legends, archetypes, myths, and symbols. They connect us to a larger self and universal truths; while creating greater communication.

devorah major (Storyteller)
devorah major is a poet, fiction and speculative fiction writer. She has just returned from Italy where her sixth book of poetry “with open arms” was released in a bilingual edition.  A Willow Press Editor’s Choice her seventh book of poetry “Califia’s Daughter” was published by Willow Press in July of 2020.  Her other five poetry books are: “and then we became,” “with more than tongue,” “where river meets ocean,” “street smarts” (Winner PEN Oakland Josephine Miles Literary Excellence Award), and “travelling women” (with Opal Palmer Adisa). major also has four poetry chapbooks, two biographies for young adults, and a host of short stories, essays, and individual poems published in anthologies and periodicals as well as two novels “Brown Glass Windows” and “An Open Weave” (winner of ALA Black Caucus First Novel Award).

Kimi Sugioka (Storyteller)
Kimi Sugioka, is an educator and poet. She earned an MFA at Naropa University and has published two books of poetry; the newest of which is “Wile & Wing” on Manic D Press. As the newly inaugurated Poet Laureate of Alameda, she will try to engage the community in a multi-cultural and intergenerational exploration of poetry and literature. Her work appears in anthologies such as: Civil Liberties United, Endangered Species, Enduring Values, Standing Strong, Colossus, and Colossus:Home.

JP Frary (Storyteller)
JP Frary has been designing and making things out of wood and metal in the SF Bay Area since 1995. Specializing in using recycled materials to create unique pieces for clients that straddle the line between sculpture and furniture. His work lives in Napa Valley wineries, kids playrooms, coastal galleries, Google offices, lush gardens, and in dining rooms with generations of families eating and doing their homework on it. JP has only been telling stories for a few years, but he has won three Moth StorySlams and one StorySlam Oakland, and has been a featured storyteller at Beyond Borders, Back Pocket Productions, The Naked Truth, and Six-Feet-Apart-Productions. He was born in San Francisco, but grew up in Mendocino County where his ability to come up with a story got him into trouble as often as it got him out of trouble.

Abdul Kenyatta (Storyteller)
Abdul Kenyatta is the Executive Director of the Speakeasy Storyteller Series. He is an award-winning storyteller and spoken word champion, including the Dirty Haiku Champion at Tourette’s Without Regrets and the 2017 Bay Area Liars Competition. He writes for NPR and Snap Judgment, in addition to singing jazz and blues. “Have Stories, Will Travel."