We Are All Dragons in Drag (World Premiere)


If you miss our early bird offerings, take advantage of our Festival Pass and see five shows for $75.00 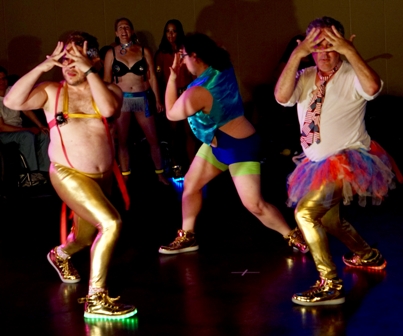 In the face of this disturbing political climate, Bandelion has been working with an original myth: All humans have ancient dragon spirits hidden inside of them, waiting for the time when they are needed to bring the world back into balance. That time is now! We see these dragon personas as parallel with Drag performance. There is great power locked inside each of us, and it can be harnessed as a tool of transformation. We Are All Dragons in Drag merges inclusive dance, music, storytelling, ritual, Drag, outrageousness, and opportunities for accessible audience participation to call forth connections to primal power.

Founded in 1996 by Eric Kupers and Kimiko Guthrie, Dandelion Dancetheater (DDT) is situated at the crossroads of dance, theater, music, community activism, healing, and new performance forms. Bandelion is Kupers’ core ensemble within DDT (founded in 2006). We are inspired by Physically Integrated Dance, in which people with and without disabilities figure out how to move together, create together and set up accessible structures for performance. Our work includes different abilities due to disabilities and devotion to different artistic disciplines. We each come with unique skills and difficulties, and we communicate rigorously to create art we’re all invested in.

Bruce Bierman is a grounded and playful Jewish dance specialist, interweaving theater, dance, and ritual Jewish performance for decades. He writes, acts in and directs theater works as well as teaching theater at Stagebridge in Oakland. He has been with Bandelion since 2015.

Dannia Ciolo, is a dancer and energy worker. Longtime member of the CSUEB Inclusive Interdisciplinary Ensemble, she joined Bandelion in 2017.

Chris Gallegos bounces back and forth between dance/theater, visual art, Live Action Role Play, and computer programming and is seeking a fusion of all three. He has performed with Bandelion/Dandelion since 2010 and graduated from CSU East Bay with a BA in Art and Computer Science in 2014.

Dawn Frank Holtan began working with Eric Kupers and Kimiko Guthrie in 1994, and she has enjoyed being a Dandelion on and off ever since. Former co-director of Frank and Bryan Dance, her choreography has been described as “poignant” and “unpretentious,” with “strength, versatility, and a sense of humor.” Dawn is currently creating “Cracking Open,” an evening-length dance-theater performance piece that will premiere in 2018. A mother of three unschooled kids, she also designs and leads artistic and academic workshops for homeschooling children via the Experientialists. For more information about Dawn and her work, visit http://dawnholtan.com

Corissa “Reese” Johnson is a 2008 graduate from CSUEB where she obtained a B.A in Theatre Arts-Dance. She currently teaches at The Next Step Dance Studio and for the City of Oakland at Studio One Arts Center as a recreation specialist, as well as runs her own dance program as part of OFASS (Oakland Fine Arts Summer School). Reese is a member of MEnD Dance-Theater company and performs with the company throughout the Bay Area.

Nils Jorgensen, a regular Dandelion/Bandelion guest artist since 2008 joined Bandelion fully in 2015. He is a disability activist, athlete born with spinal cord injury, advocate for the marginalized and bass-voiced actor and singer. Nils directs the Embarcadero YMCA Adaptive Athletics Program.

Eric Kupers has co-directed, choreographed, and performed with Dandelion Dancetheater since its inception. Eric is an Associate Professor of Dance at Cal State University East Bay. He is the director of Bandelion, as well as the CSUEB Inclusive Interdisciplinary Ensemble (founded in 2006,) which brings together students, alumni, community members and professional performers with and without disabilities and from diverse cultures to create original performance works. Eric has been a resident artist at the Baryshnikov Arts Center, CELLspace, Jon Sims Center for the Arts, and ODC Theater.

Amy Marie is a dancer, choreographer and jewelry artist. She founded and directs AVID, a dance/theater company. She performs with the CSUEB Inclusive Interdisciplinary Ensemble and joined Bandelion in 2017.

Keith Penney is a musician desperately trying to learn to dance. He has been performing with Dandelion/Bandelion since 2008 and often serves as the ensemble’s musical director.

Frances Sedayao has worked on and off with Dandelion since 2001, joining Bandelion fully in 2014. She is a dancer, choreographer, improviser, Tae Kwon Do black belt, singer, flutist, Pilipinx native. She has performed with Nina Haft and Company, Anne Bluethenthal, Alleluia Panis, and many more Bay Area choreographers. Frances teaches dance, Yoga, fitness, and Pilates for the CSUEB Kinesiology department.

Deborah Trudell is a dancer, singer, and mother of two. She’s been an active part of the CSUEB Inclusive Interdisciplinary Ensemble since its founding in 2006, Dandelion Dancetheater since 2001, and Bandelion since 2017.

Masa Fukuizumi (collaborating composer/musican) is the founder and director of Eden Aoba Taiko and the director of LEEP Taiko. He is dedicated to bringing Taiko and Japanese cultural forms to anyone that wants to learn.

LEEP Taiko (collaborating musicians) is an ensemble of faculty and staff that have been playing Taiko together for over 3 years and has collaborated with Eden Aoba Taiko, Bandelion, the CSUEB Inclusive Interdisciplinary Ensemble and the CSUEB Breakers.