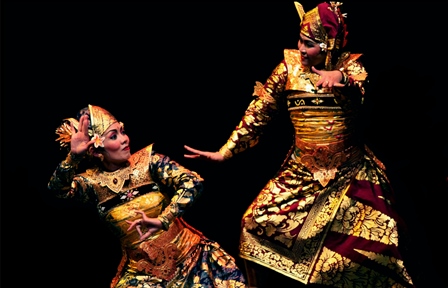 Gamelan Sekar Jaya returns to SFAIF with a thrilling mix of traditional and contemporary Balinese music and dance! The internationally acclaimed performing arts troupe celebrates its 40th Anniversary under the direction of legendary gamelan composer, I Nyoman Windha, and dance master, I Nyoman Cerita. These two luminaries of the Balinese performing arts lead the 50-member Bay Area company through a dynamic range of Balinese music and dance that resonates in the heart and captures the imagination with its intricacy and depth. This dazzling anniversary show will feature Sekar Jaya’s four distinct gamelan ensembles-- the delicate gender wayang quartet, the shimmering bronze angklung and gong kebyar orchestras and the riotous giant bamboo gamelan jegog. The evening includes an unmissable world premiere collaboration created by Windha and Cerita.

I Nyoman Windha is one of the leading musicians and contemporary composers of Balinese gamelan music, whose works are universally admired and imitated for their melodic and formal beauty. He was born in the village of Singapadu from the Gianyar regency of Central Bali, where he grew up surrounded by a thriving community of musicians and dancers. He received his training in music and dance at the National High School for the Performing Arts (SMKI), the Indonesian Institute for the Arts (ISI), and holds a masters degree in Music Performance and Composition from Mills College, Windha has been a resident artist with the Asian Cultural Council, a recipient of the Fulbright scholarship, and has taught and performed in universities and festivals all over the world, including Japan, China, Canada, Denmark, Switzerland, and Germany. He has been Sekar Jaya’s Guest Music Director on several occasions since his initial residency in 1990.

I Nyoman Cerita is one of Bali’s most influential choreographers and teachers. He was born in the the village of Singapadu from the Gianyar regency of Central Bali, an area renowned for its vibrant dance traditions. He is in demand all over Bali as a choreographer and teacher. His works range from large scale dance dramas to new works for youth and children. He is also frequently featured artist in the Bali Arts Festival, the island’s largest and more renowned festival for performing arts. Cerita has also presented his work internationally at universities in Japan and the United States. Cerita has previously worked with Gamelan Sekar Jaya as a Guest Dance Director in 1999. He received his BA from ASTI, his S1 from STSI and his MFA from UCLA. He serves as the Head of the Dance Department at ISI Denpasar (Institut Seni Indonesia) and recently completed his PhD at Udayana University.