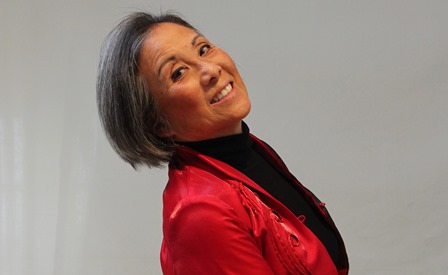 Grandpa went to work every morning donning a white starched shirt with a black bowtie, a black tuxedo and shiny black patent leather shoes. After gulping down a raw egg from under the hen in his mansion's backyard, his chauffeur would drive him to his fancy restaurant, the Mandarin Inn, to oversee his 100 workers. The day would pass into the evening until he came home at midnight. But one late night the phone rang instead. It was 1924 in a Chicago made of possibility AND danger ~ tong wars (Chinese mafia), gambling, murders, prohibition… a mystery awaits … Multi-media staged reading.

Eth-Noh-Tec
Eth-Noh-Tec, founded in 1981 by Nancy Wang and Robert Kikuchi-Yngojo, is interdisciplinary story theater of precision choreography, music and lyrical word-weaving. Performing ancient Asian mythologies, folktales and urban legends along with contemporary Asian American inspiring stories, Eth-Noh-Tec has created an exciting new blend of storytelling and kinetic theater. Eth-Noh-Tec performs nationally and internationally with storytelling theater programs, workshops and residencies in festivals, educational institutions, theaters and conferences. They have also appeared on television and radio shows such as NPR's "All Things Considered," and PBS. They are most proud to have performed in the Clinton and the Obama Inaugural Celebrations.

Nancy Wang
Nancy studied various modern dance techniques: Martha Graham, Jose Limon and Hanya Holm and began her dance career with the Performing Arts Workshop under the mentorship of dancer, choreographer, satirist and Master teacher Gloria Unti. With the addition of traditional Asian dance forms from Bali and the Southern Philippines, her choreography and dance performances in both contemporary and ethnic forms were featured in major dance festivals: SF Ethnic Dance Festival, Asian Pacific Festival in Vancouver Canada, Asian American Dance Fest, and in And Still We Dance, a documentary. Her plays of Asian American themes include: "Leave Me My Dreaming" produced by the Asian American Theater, "Unspeakable Moons," Noh Theater, "Takashi's Dream" (various festivals and theaters), "In Need of Goddesses" commissioned by Creative Work Fund, “Bittersweet” commissioned by Racebridges, and “Red Altar” (various festivals and theaters)

Robert Kikuchi-Yngojo
Synthesizing spoken word with kinetic sensibilities, interlacing music to create interludes and atmosphere, and engaging his audiences into playful participation are all of the elements Robert values for conveying his philosophy through performance. Robert's accomplishments include composing film scores for such notable Asian American filmmakers as Wayne Wang ("Chan is Missing" and "Eat a Bowl of Tea") and Felicia Lowe ("Carved in Silence"); performing and songwriting on recordings for such Asian American bands such as "Yokohama, California," "Bamboo Brew," and "The Noh Buddies." As pioneer and master teacher of kulintang gong music in Northern California, he fathered the kulintang movement and founded the groups "Kalilang" and the "San Francisco Kulintang Ensemble." He was acknowledged with a SF Izzy Award and the National Young Audiences "Artist of the Year" award.