Funded in part by: My funding credits include private donors exclusively. 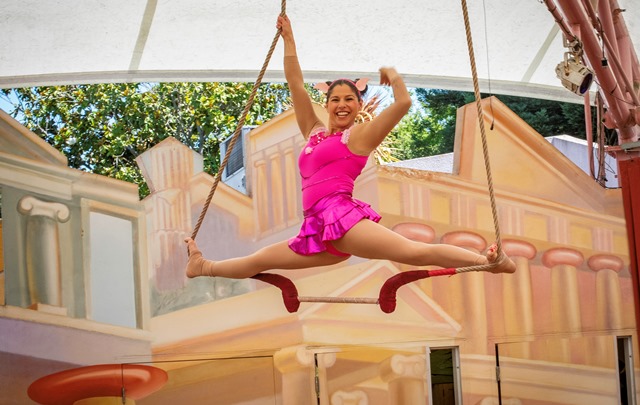 Imagine your myopic world. It’s at once better and far worse than now. Humans might become panicked by the prospect of the world ending and yet are selecting their perfect ensembles and hairstyles for the end times. Ads for air conditioners and deodorant abound. Beyond all the craziness, a group of new vaudevillians are rehearsing what might be the very Last Show on Earth. Before their show, they struggle to hear a news report. There is so much static they cannot hear all the words distinctly: they might have heard ICBMs, tuna fish, hydrogen bombs, 20G WiFi. Ready?

Notoriety Variety is a non-profit that supports many creative acts. Individual performers from this performing arts non-profit have entertained throughout the Bay Area. “The Doomsday Follies” at SFIAF marks their debut performance as a company.

Felicity Hesed (Performer)
Felicity Hesed is a performer and director. She recently returned from London where she was performing her show “Cara Vita: A Clown Concerto” which made its premiere in 2019 at the San Francisco International Arts Festival. “Cara Vita” is a theatrical piece incorporating live music, clowning, and trapeze to explore the joys, sorrows, and hilarity of modern adulthood. Felicity’s most recent directing project will open this June at Circus Center – an immersive, karaoke, circus adaptation of “A Midsummer Night’s Dream.” To learn more about Felicity go to felicityhesed.com or follow her on social media @felicityhesed.

Diane Wasnak (Performer)
Diane “Pino” Wasnak credits Judy Finelli with her Circus career 31 years ago when she was hired by Judy to be clown partner with the late great Joan (Queenie Moon) Mankin in San Francisco’s Pickle Family Circus. Diane is thrilled to be working with Judy again. Diane’s latest project was playing a deranged Sorority house mother in a low-budget slasher film. Currently, Diane enjoys teaching other’s what she has learned over the years and she also enjoys working with animals of all sorts except fleas, ticks, and mosquitos.

Fleeky Flanco (Performer)
Currently a refugee of the art apocalypse imploding in San Francisco Fleeky is the co-founder of Circus Automatic and also a Co-founder of the Royal Russian Kung fu Circus Training Academy of Heaven Mountain. When not figuring out which town to go to next fleeky is also developing (along with several other amazing developers) the Autonomous Theatre with the eventual goal of creating an open source affordable and compelling set of technologies to empower itself and the next generation of performers.

Texas Holly (Performer)
Texas Holly is a goofy little booger, shamelessly in pursuit of laughs. She’s a wrangler of children, a keeper of community, and a collector of crazy old ladies. Loves dancing more than is legal, both on the ground and on stilts. Texas is grateful to mentors who have shared their knowledge and provided tools allowing her the opportunity to pursue a passionately purposeful career. So as doomsday approaches and the world comes crashing down all around us, take comfort in the immortal words of Tom Lehrer, knowing that, “we will all go together when we go.”