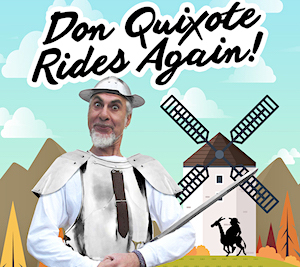 Don Quixote is back! Following the success of the 2018 production ¿Dónde está Don Quixote? the San Francisco Flamenco Dance Company invites young audiences on another whimsical flamenco adventure. Master Flamenco artist Luis de la Tota stars as Don Quixote in this bilingual, rhythmic escapade filled with dazzling footwork, colorful costumes, audience sing-a-longs and more. A dynamic cast of musicians and dancers bring the excitement and beauty of this traditional Spanish art form into a family length program that will captivate children and adults alike. He can rap, he can tap, he will make you laugh! Don Quixote rides again and you’re invited!

San Francisco Flamenco Dance Company
SFFDC is a performance collective committed to preserving the cultural integrity of flamenco. Over the past few years, the SFFDC has emerged as a leading exponent of flamenco dance and music in the Bay Area. The SFFDC presents annual theatrical programs like the January 2019 production Volver at the Brava Theater in San Francisco. SFFDC made its debut at the San Francisco International Arts Festival in 2018 with the productions 5xLorca and ¿Dónde está Don Quixote? The company returns in 2019 with the premiere of Don Quixote Rides Again, a family focused production starring flamenco master Luis de la Tota as Don Quixote.

Kerensa DeMars
SFFDC artistic director, Kerensa DeMars is known for her unique synthesis of Flamenco and Middle Eastern dance. She has performed internationally at prestigious venues including London's Royal Festival Hall, the Teatro Calderón of Madrid, and the Tivoli Theater in Barcelona. Kerensa lived in Spain from 1997-2004 where she trained intensively with some of Spain’s foremost Flamenco artists. She has served on the Isadora Duncan Dance Awards Committee and received consecutive commissions for major works from the San Francisco Arts Commission. She is the Artistic Director of the San Francisco Flamenco Dance Company which recently presented Volver at the Brava Theater in San Francisco.