“Touching the Depths of the Earth with One Note” (World Premiere) 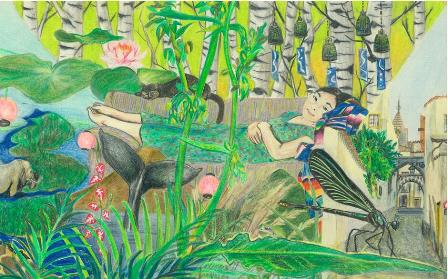 Composer Tomoko Momiyama mediates communication between people and the environment through her music. Her works invite the audience to listen to what is not readily audible in their surroundings and re-imagine their collective memory of living on this earth.

“I Saw Time, under a Cherry Tree,” for example, is an electro-acoustic piece Tomoko created as a response to the ongoing nuclear disaster in Fukushima, Japan, since 2011. The core of the piece is composed of sounds from the inside of trees. Alternatively, “When Humans Go Extinct,” premiered in 2014 in Johannesburg, South Africa, is her multi-media composition for piano, electronics, and image projections. The work employs sounds from within the earth. It is based on underground explorations at anthropological excavation sites of early human fossils as well as in-depth dialogues with communities affected by current mining developments.

Tomoko’s new work is commissioned by the U.S./Japan Cultural Trade Network and is scheduled to premiere as part of the San Francisco International Arts Festival in May 2019.  The work is inspired by conversations with members of the Bay Area's diverse communities, including artists and specialists in seed science, migratory birds, and sea navigation. By weaving together multiple perspectives on the experiences of their respective journeys, the work explores the issues of home and diaspora identities in the Bay Area and beyond.  Tomoko is deep in her creative process and asking such questions as “how do we all beings, including us humans, orient and navigate ourselves on this earth and with each other?”

The audience members will be invited to actively participate in the performances and become an integral part of the sound and stories composed and designed by Tomoko and her collaborators, including Koto virtuoso Shoko Hikage, visual artist Aisuke Kondo, agroecologist Kana Koa Weaver, and theater artist Yuriko Doi.

Tomoko Momiyama
Tokyo based Tomoko Momiyama works internationally as a music composer, dramaturg, and producer of multi-disciplinary art events, installations, and performances. She graduated from Stanford University in the U.S. with B.A. in Music and Human Biology and further studied composition at the Royal Conservatory of the Netherlands in The Hague under the Japanese Government Overseas Study Programme for Artists. Tomoko’s works, many of which are community-based and site-specific, have been performed throughout Japan, as well as in different parts of Asia, Europe, North and Central Americas, and Africa.

Shoko Hikage
Shoko Hikage began playing koto at the age of three. Her first teacher was Chizuga Kimura of the Ikuta-ryu Sokyoku Seigen Kai in Akita Prefecture, Japan. She received special training from the 2nd and 3rd IEMOTO Seiga Adachi. In 1988, Hikage graduated from Takasaki College with a major in koto music. She was then accepted as a special research student at the Sawai Sokyoku-in under Tadao and Kazue Sawai. In 1992, she moved to Honolulu, Hawaii to teach koto at the Sawai Koto Kai Hawaii and at the University of Hawaii. Shoko relocated to San Francisco in 1997 where she continues her concert and teaching activities. As well as being a soloist, Shoko is an active member of both the Wooden Fish Ensemble and Koto ensemble Lantana. She has also collaborated with musicians and artists of other genres, including Anthony Brown’s Asian America Orchestra, Hiroshi Kashiwagi, Hyo-shin Na, Brenda Wong Aoki and Mark Izu among others.

Kana Koa Weaver
Kana Koa Weaver is a seed saver / scholar-activist based in Berkeley, California. Kana travels across Japan, Hawaii’i and US to inherit traditional wisdom on seeds and farming. She provides lectures and workshops on seed stewardship, writes and translates about seeds, farming and food movements, and provides tours. Her latest translation work: Political Dynamics of Transnational Agrarian Movements was published in Japan in 2018 (English to Japanese). Kana received MA in Agrarian and Environmental Studies from International Institute of Social Studies the Hague, Erasmus University in Netherlands. She is the mother of a 3 years old.

Aisuke Kondo
Born and raised in Japan and currently based in Germany, Aisuke Kondo explores questions of belonging, identity, memory, and history across a variety of media, from collage and gallery installation to video and performance. In 2008, he completed a Meisterschüler in Fine Art at Berlin University of Arts. After his university graduation, he received a grant from the Asian Cultural Council to research on his great-grandfather who was incarcerated at Topaz concentration camp in Utah during World War Ⅱ. Currently, he is working in the Bay area on a grant from the Cultural Affairs Agency in Japan in order to conduct fieldwork as a visiting scholar in Asian American Studies at SF State. In his current “Matter and Memory” series (2017-present), Kondo retraces his great-grandfather’s life as an immigrant in the US from his arrival in the early 1900s. Kondo has had solo exhibitions at Gallery Turnaround in Sendai, Japan (2018), Kommunale Galerie Steglitz-Zehlendorf in Berlin (2018), MINTMOUE in Los Angeles (2017) and Kyoto Art Center in Kyoto, Japan (2016). His works are on view, along with an extensive interview with the artist, at aisukekondo.com

Yuriko Doi
Japanese-born and trained in the classical theater styles of Noh and Kyogen, Doi brought this heritage to the West in the 1960s, founding Theatre of Yugen in 1978. That troupe has proven to be the major beneficiary of Doi’s directorial resume’ of more than 30 productions. Her foundation in these arts began when she was a graduate student of Waseda University in Tokyo, where she studied with Kyogen master and National Living Treasure of Japan, Mansaku Nomura. She has also been influenced by the Noh practice of her aunt, Yuki Doi, and her studies with Noh principal actor Shiro Nomura. The array of productions Doi has directed range from classics and adaptations to original works. She has taken for her inspiration theater throughout time, from around the world, directing plays that run in style and subject matter from Japanese and Greek mythology to 20th-century American, using movements from sources as diverse as flamenco and Native American dance. She is also an experienced sailor and has traveled throughout the world by yacht with her husband. She wrote a book about the adventure in Japanese, which is currently being translated into English.

U.S./Japan Cultural Trade Network (CTN)
CTN was founded as an international project of Arts Midwest, headquartered in Minneapolis, MN in 2001 to provide leadership, vision, information and support to enhance cultural trade between the U.S. and Japan. Under the leadership of its founding director, Kyoko Yoshida, CTN has designed and implemented a number of exemplary exchange projects with an array of committed partners and participants, developed long-term relationships and broadened the knowledge within the professional community about artistic resources and practices in both countries. After its successful and productive operation of five years in the Midwest, CTN relocated to the Pacific-rim city of San Francisco in 2006 to become an independent nonprofit organization.