If you cannot attend, but would like to support Byb and Kiandanda Dance Theater, thank you for making a donation.
DONATE

These performances of Religion Kitendi are presented as part of ODC Theater’s Discount Initiative. 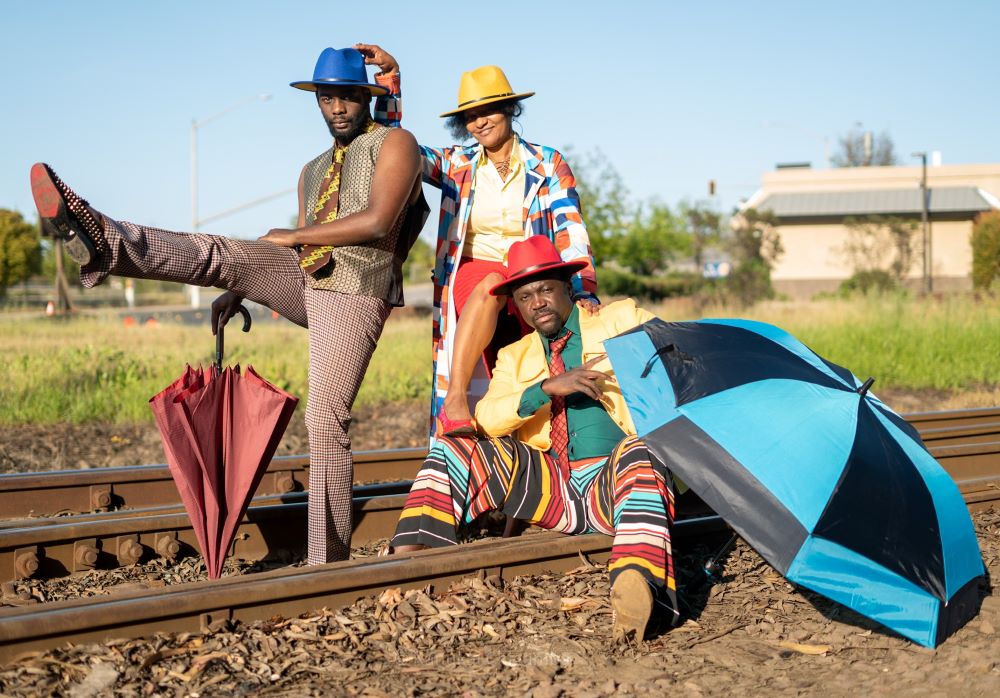 
Religion Kitendi uses haute couture fashion as a point of departure to examine the prevailing legacy of the slave trade and European colonization of Africa. The piece invokes the worldview of Congolese sapeurs, dandily dressed men and women who endeavor to survive economic hardship and political turmoil by feeling good in their attire. There is an ironic humor in the sorrowful trend of people spending large sums of hard-earned money to seek joy and hope in kitendi (clothes). But these are acts of resilience that bring affirmative feelings of prosperity, and with them a sense of healing and belonging.

Kiandanda Dance Theater’s mission is to generate innovative performing art projects that address specific social justice issues that undermine the global human society.Through its Mbongui Square Festival project, KDT seeks to promote diversity, equity, education and an exchange of ideas through a multidisciplinary program that aspires to be a transformative experience for the individual and the community.

Founded in 2008 in the Republic of Congo, KDT is an international performing arts company based in San Francisco that makes choreographic work exploring themes around social justice issues. KDT dance aesthetic is rooted in the dance cultures of the Kongo people of Central Africa.

The company creates ethnic and contemporary dance works and aspires to bridge performing artists from Africa and the US via its two programs Mbongui Square Festival and Tracing Africa Circle-African Dance Histories and Philosophies.

Chanel “Byb” Bibene (Artistic Director, Choreographer, Projection Design)
Chanel Bibene is a dance educator, choreographer and performer. He is the founder and artistic director of both Kiandanda Dance Theater and the Mbongui Square Festival.

Bibene’s innate technical and aesthetic sensibility is rooted in the culture and dances of the Republic of Congo. His professional foci are the interdisciplinary areas of theater, traditional, Afro-urban and contemporary dance. Bibene has performed internationally and toured throughout the world with companies originating from Africa, Europe and the United States.

Prior to training in Europe, Byb practiced the traditional arts in his hometown of Dolisie, RC. This training was interrupted when Byb and his family became refugees during the 1997 civil war. Much of the focus of his work since this time has been to draw attention to the plight of war refugees in general, and those from Africa in particular.

Latanya D. Tigner (Artist Advisor, Dancer)
In addition to being a longtime collaborator with Byb and Kiandanda, Latanya d. Tigner has performed professionally with Dimensions Dance Theater within multidisciplinary works rooted in African diasporic dance forms since 1986. She holds a B.A. in Physical Education/Dance and a Master’s in Arts Administration. She directs Dimensions Dance Theater’s youth company and lectures at University of California, Berkeley. In her 30 plus-year dance career, Latanya has created commissioned works for Dimensions Dance Theater, Black Choreographers Festival, Robert Moses’ Kin, UC Berkeley, Mills College, and has presented work in SF Ethnic Dance Festival, CubaCaribe, and Mabina Dance Festival (Congo-Brazzaville). She has also set choreography for Cal Shakes' black odyssey, SF Shakespeare's A Winter’s Tale, Ubuntu Theater's Dance of the Holy Ghost, Delina Brooks' An Open Love Letter to Black Fathers, Contra Costa College's In the Blood, For Colored Girls, and Godspell, and Li Smith's Victorious. Additionally, Latanya serves as Co-Artistic Director of the San Francisco Ethnic Dance Festival for the 2018–2021 seasons, and is a founding member of Oakland Anti-Racism Organizing Committee. Latanya has ongoing research on African dance retentions in African American social dance, which has led to the creation of Dancing Cy(i)phers, an annual symposium that connects the coded languages of African rooted dance.

LaKiesha Golden (Dancer)
Lakiesha is a performing artist with a specialization in Congolese (Central African) Dance. She's been an Artist in Residence, teaching in Oakland Unified School District high schools via Dimensions Dance Theater, and she's been one of the teachers for the Sunday Congolese class at Malonga Casquelourd Center for the Arts in downtown Oakland. Astonishingly, Ms. Golden had the opportunity of studying Congolese dance and culture internationally in Brazzaville, Congo and in Paris, France. Among training through Congolese dance, LaKiesha has had experience with other forms of dance including but not limited to: Haitian, West African, Lindy Hop/Swing, Hip-Hop, Motown Ballroom and other social dances. Ms. Golden is the Artistic Director of the Congolese performing dance company, Nlolo Kongo, meaning an 'Echo' or special sound of the Congo as well the Director of Cultural Arts of Gold(CAG), the umbrella organization that produces the Congolese Dance and Drum Festival: Biamvu Bia Kongo, CO.SEN.GU workshops and other arts events! She currently teaches online workshops and has some outdoor classes in Oakland.

Shawn Hawkins (Dancer)
Shawn, first discovered his passion for dance as a freshman in college at California State University, East Bay. It was there that he honed his unique choreographic skills to fuse hip-hop and modern dance styles. His pieces have ranged from a variety of topics such as social and political issues. Shawn is currently sharing his talents with several dance companies around the bay area including: Dimensions Dance Theater, Visceral Roots Dance Company, and Bahiya Movement. Launching his own company, Dark Faith Dance Company has been a lifelong dream that finally came to fruition in 2020. Throughout his dance career in college and post-graduation, he decided teaching youth was his passion. He believes in inspiring youth and developing an atmosphere for every child to thrive, no matter their environment. Shawn is a firm believer that art is a necessity and no child should be left without the amenities of life.