Funded in Part by
Taiwan Academy, Taiwan Ministry of Culture. 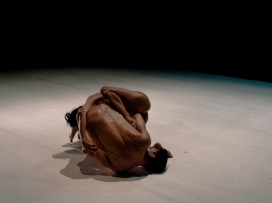 San Francisco International Arts Festival is pleased to present to US audiences the international husband and wife team of Zoltan Vakulya from Hungary and Chen-Wei Lee from Taiwan. Making their US debut at the Festival the couple will perform their signature work, Together Alone --a solo danced as a duet that counters individual loneliness with the power of being together.

Deprived of all external concealment and decorations, the two return to the primitive in dance and face each other as their most naked selves. In this intimate space they communicate and learn to move forward through compromise and cooperation. Giving and receiving, they explore the invisible border dividing the seemingly connected bodies. By constantly linking up and then separating they ﬁnd harmony in conﬂict and conﬂict in harmony. Through unceasingly merging, transferring, destroying and then reconstructing--eventually they squarely face their respective loneliness, together.

Profound as the piece is on many levels there is also a pragmatic explanation for the work. As professional dancers and journeymen who both tour internationally with different companies, Ms. Lee and Mr. Vakulya find themselves occupying precious few moments in a shared physical space. So they spent some of those moments making a dance about the experience.

Chen-Wei Lee (Choreographer, Performer)
Chen-Wei is a Belgium based Taiwanese artist who began her career as a dancer with Batsheva Dance Company from 2009-2014, during which she worked closely with Ohad Naharin, Sharon Eyal, and Yasmeen Godder. She was also a guest dancer at GothenborgsOperas Danskompani in 2015-16, Tanztheater Wuppertal Pina Bausch in 2017 and VOETVOLK/Lisbeth Gruwez in 2017~2019. Chen-Wei also works all over Europe with Jerome Bel, Marina Mascarell, Marcos Morau, among others. She is a freelance dancer, choreographer and Gaga teacher.

Zoltan Vakulya (Choreographer, Performer)
Zoltan is a Belgium based dancer and choreographer, born in Budapest in 1986. He graduated as a dancer in SEAD (Austria) in 2011 after he studied dance and choreography in BKTF (Budapest). As a dancer/performar/collaborator he has worked with choreographers/composers/visual artists such as: Kendell Geers, David Zambrano, Hód Adrienn, Octavi Rumbaou, Benjam Vandewalle, Radouan Mrziga and Georgia Vardarou.Since 2011 he has been creating on and off-stage performances (PAUSE (2012), OneTwoThreeOneTwo (2015), Together Alone (2016), It’s time (2017), Etudes on machines (2018)/ which he presented across Europe, USA, Brazil, South Korea and Taiwan. Recently he began to collaborate with Shih Chien University (Taipei) with the new media design students in a format of cyclic atelier as a guest professor. He is currently working for Hodworks (Budapest) and Mal Pelo (Barcelona) while he is creating a new solo work with Chen-Wei Lee called kNown face.