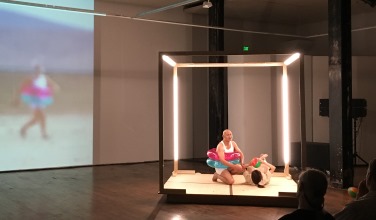 Co-produced by Circuit Network and Mixed Bag Productions, POOLREADY!, choreographed by Salt Farm's founding artistic director Ledoh, explores the complexities of climate change, and the irony in the futility of individuals being able to act collectively in their self-interest and for the good of humanity. Ledoh's character is prepared for the next Noachian flood-at the ready, with floaties, snorkel and fins, equipped to float in an illuminated display case, surrounded by a digitally-induced desert yet threatened by flood. Videographer Perry Hallinan provides media design, with music by Matt Ogaz and Reverend Markus Hawkins, and performances by Ledoh and Monique Goldwater.

Ledoh is an internationally-renowned choreographer and performance artist. Ledoh trained in Japan under Butoh Master Katsura Kan (member of the radical 70s collective BYAAKOSHA), and has since electrified audiences around the globe for over 15 years with his riveting solo and ensemble performances. Born into the Ka-Ren hilltribe, Ledoh came to America at age 11 to escape the oppression of his people by the brutal dictatorship holding power in Burma. As Artistic Director of SALT FARM, Ledoh choreographs with a raw movement vocabulary and directs the production of sets, video art, and musical scores to create a vital, visceral brand of live theater and site-specific installations that can soothe then shock within the span of a timeless moment.

Perry Hallinan has worked as a multimedia artist and performer with Ledoh and Salt Farm since 2002. His collaboration with Ledoh/Salt Farm has influenced his work as a cinematographer and editor for his documentary and commercial productions. Outside of dance, his video works focus on infrastructure projects, environmental stewardship initiatives, and a diversity of businesses, cultural programs and educational commitments. Perry received two national American Public Works awards for Journalism and Best Infrastructure Project on video projects he produced for the New England Chapter of American Public Works and the Town of Marblehead.

Monique Goldwater attended the Rosella Hightower International Ballet School in Cannes, France, and began her professional dance career at age 15 with the Avignon Opera Ballet. She moved to Los Angeles in 2000 and was a soloist with the LA Chamber Ballet and LA Opera. In 2003 she moved to San Francisco and began her pursuit of Japanese classical contemporary dance, performing with Takami, Ledoh/Salt Farm, Mary Sano, and Golden Gate Opera. She appeared in Ledoh's productions of "Suicide Barrier" produced by Circuit Network at ODC Theater in June 2011, and Heartland at San Francisco's Asian Art Museum in August 2013.