Speaking From The Body 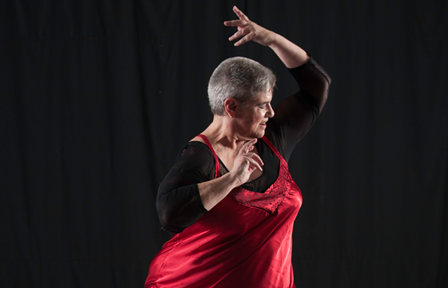 Speaking From The Body ‘A dancer of tremendous joy’ **** (Edinburgh, Scotland Fringe Festival Magazine: Fest, 2014) New works and old favorites! These challenging times are calling upon us to dig deep within and bring forth the best in us. With the intimate story telling of queer and not-so queer tales that I share using movement and spoken word, I inspire others to find those places within themselves. I, at 66, queer and plus-sized, have freed myself from limiting standards and serve as an inspiration to others to continue making art for as long as they want. Come be very entertained and inspired!

Lucia August is a choreographer, performer and dance educator who has been dancing for over sixty years. She trained with many renowned artists, including Bella Lewitsky. Lucia was a company member and collaborator of Dandelion Dancetheater (2003-10) performing throughout California and nationally. Since 2010, Lucia has been performing her own choreography through her platform, Lucia August/Everybody Can Dance in many San Francisco Bay Area locations. She was an artist-in-residence at San Francisco’s SAFEhouse for the Arts during 2015-16. Lucia performed her one-woman show, standingOUTstanding, at the Edinburgh, Scotland Fringe Festival in 2014, earning two four-star reviews and then again in 2017.