Daughters of the Delta

If you cannot attend, but would like to support Michelle Jacques and Daughters of the Delta, thank you for making a donation.
DONATE 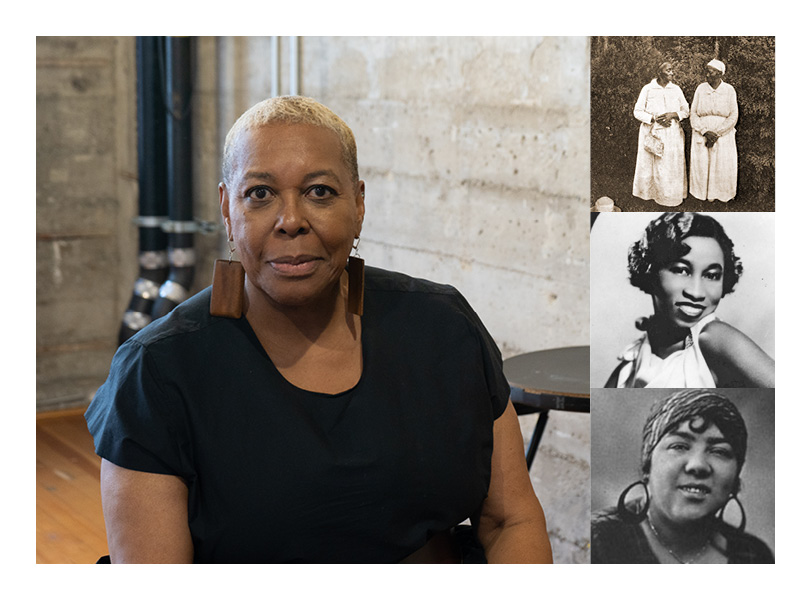 Daughters of the Delta


Celebrated joyously in Michelle Jacques’ signature New Orleans Big Band style, Daughters of the Delta is an anthology that honors African American women composers and musicians hailing from Louisiana in the late 19th and early 20th centuries. Seminal figures whose body of work became the backdrop to the Great Migration as Black people moved out of the South during the Jim Crow era. But also individuals whose names were in danger of being written out of history.

Exploring the genres of Spirituals, Gospel, Jazz and the Blues, and featuring original compositions and lyrics by Ms. Jacques and Cava Menzies with new arrangements of traditional songs by Brian Dyer, Daughters invokes the memories of these legendary ladies and invites their spirits into the house. Join CHELLE and friends to celebrate the likes of great women such as Becky Elzy and Alberda Bradford, Lil Hardin Armstrong, Lizzie Miles and many more.

Presenting a festive combination of jazz, funk, soul, Creole, Cajun, gospel, Caribbean, African, Zydeco, rock and the chants and stirring rhythms of Mardi Gras Indians; New Orleans native, and Oakland's own "Queen of New Orleans Music", Michelle Jacques and some of her very special friends take all of these influences and a few more, and stir them into a stewpot of musical gumbo that is sweet, spicy, aromatic and definitely intoxicating. CHELLE! and Friends create an unforgettable sound and the ensemble is made up of some of the most distinguished and accomplished musicians in the San Francisco Bay Area.

Michelle Jacques (Artistic Director, Vocals)
Jacques is the Artistic Director/founder of the CHELLE! and Friends New Orleans big band and CHELLE’S JUKE JOINT an a cappella quintet. During a four-decade career in the music industry, Michelle is, was and has become: a singer, bandleader, composer, songwriter, musical-arranger and educator. Michelle has traveled and performed with many well-known artists including: Wynton Marsalis, Linda Hopkins, Ladysmith Black Mambaza, Pete Seger, The Persuasions, Al Green and Manhattan Transfer. Notable Festival appearances include Montreux, Gurten, Berne, Festijazz and the UN Conference of Human Rights, Geneva. She was also a founding member of Street Sounds a cappella quintet and an original member of Linda Tillery’s Cultural Heritage Choir. Michelle’s educational portfolio includes: director of the Select Vocal Ensemble at Oakland School for the Arts, San Francisco Symphony's Adventures in Musc, Oakland Youth Chorus, Cazadero Performing Arts Family Camp, education programs/workshops at Stern Grove, the Bay Area Discovery Museum and Yerba Buena Gardens in San Francisco. She is a lecturer at University of San Francisco and also serves as the Vice-President on the Governors Board of the Recording Academy’s San Francisco Chapter, and the board of the San Francisco Gay Men's Chorus.

Cava Menzies (Co-creator, Researcher)
Cava is a multidisciplinary musician, visual artist, and educator who resides in Oakland, Ca. She is a Bay Area native and hails from a long line of creators; her grandmother a pioneer in the New York Jazz scene as a dancer at the Cotton Club, her father, Eddie Henderson, an accomplished jazz trumpeter and early member of the Herbie Hancock sextet, and her mother a classically trained flautist and music enthusiast.    Cava holds a BA from the Berklee College of Music in Boston where she studied jazz piano and music education. She received her MM from the University of Miami where she studied composition and music production and recording. Cava is a founding music faculty member at the Oakland School for the Arts and served as the Artistic Director of the school from 2015 - 2018. Her musical directing and arranging work have been featured in performances with Chris Martin, Coldplay, Daveed Diggs, Rafa Casal, Dave Grohl, Kehlani, and Adrian Marcel. Through her cumulative work at OSA, Cava has led four concert tours to Italy, Puerto Rico, and New Orleans and has taught over 2000 young musicians from Oakland.

Rhonda Crane (Vocals, Percussion)
Although Rhonda is native to Brooklyn, New York, she was raised in the San Francisco Bay Area. Being associated 17 years with the Edwin and Walter Hawkins Music & Arts National Conference has blessed her to work with numerous artists as the O’Jays, Tramaine Hawkins, Donald Lawrence, Ricky Grundy, Daryl Coley, LaShun Pace and Yolanda Adams to name a few.

Tammi Brown (Vocals)
Tammi Brown is a sultry songstress and musician receiving broad praise for her rich tones, elegant phrasing, and stylistic versatility. Her musical career has taken her to venues as diverse as Apollo Theater in New York City, Yoshi’s in San Francisco, Mumbai Stadium in India, the Monterey Bay Blues Festival and the Monterey Jazz Festival. She has worked with jazz guitarist, Stanley Jordan, Tom Schuman of Spyro Gyra, White Album Ensemble, the Santa Cruz County and Monterey Symphonies and shared a bill on tour with Dr. Maya Angelou. She is currently a featured vocalist with musicologist and two-time Grammy nominee, Linda Tillery and the Cultural Heritage Choir and CHELLE’s Juke Joint.

Jammin' Jay Lamont (Vocals)
Singer and comdeian, Jay Lamont is originally from Oklahoma City and is a graduate of Langston University with a B.A. Degree in Broadcast Journalism. Jay relocated to Houston to work in the comedy business and embark on a career a singer. He subsequently toured nationally and internationally with Street Sounds. In addition to working with CHELLE, Jay is also the lead vocalist with two R&B bands. His groups have opened for a wide variety of artists including the late great Luther Vandross, MAZE featuring Frankie Beverly, D.L. Hughley, Steve Harvey, Tommy Davidson, Cedric The Entertainer, Mike Epps, Jamie Foxx, R. Kelly, The Gap Band, The O’Jays and the late Roger Troutman.

Ruthie Price (Drummer/Percussionist)
Ruthie Price is a tasty, soulful Bay Area native professional drummer and music educator. Picking up sticks at the age of six at church, Ruthie has never put them down; she’s been honoring her craft in Jazz, Gospel, Funk, Hip Hop, R&B, and Rock for 25 years strong. Ruthie has played on five continents and featured on Jay Leno’s “Tonight Show” with Grammy Award Winner Van Hunt. She played for the first female president Sir Leaf Johnson in Liberia with Jazz & Democracy, performed on the TV show “Empire” and won the NPR Tiny Desk competition with Grammy Award Winner Fantastic Negrito. Ruth has also performed with Whiz Khalifa as part of the 2017 “Break Through Prize Awards” on National Geographic. You can find Ruthie performing through the bay at SF Jazz, Yoshi’s, New Parish, the Fox and other local venues. When not slaying on stages, Ruthie is saving lives by dispensing blood to hospitals throughout Northern and Southern California, Arizona, New Jersey and Nevada.  You can reach her via instagram @trypriceler, face book Ruthie Price, and Ruthieprice.com.

Eric Swinderman (Guitar)
Eric Swinderman is a master guitar player. His repertoire embraces Jazz, Blues and Spiritual music. Eric’s arrangements engage audiences and transport them to a world of unbridled joy, poignant pleasure, and unforgettable moments of creative magic. He is committed to creating lasting memories through composition, improvisation, and education. Also recognized for his deep appreciation of music and music history, Eric is held in high esteem among jazz aficionados and his peers in the music industry. The late music critic, Phil Elwood compared Eric to players such as Charlie Byrd, Barney Kessel, Herb Ellis, Joe Pass, Jim Hall, Eddie Duran, Howard Alden, Jimmy Bruno, Bruce Foreman, and Laurindo Almeida—as a guitarist worthy of inclusion in this esteemed group.

A Word About the Venue

Plymouth Church of Jazz and Justice

No matter who you are or where you are on life's journey, you're welcome here!

Justice Making
Here at Plymouth, we're a justice-seeking people who follow a justice-making God. You will be encouraged to see yourself as a beloved child of God and a “co-conspirator” in building a world where God's dream of dignity and respect for all people is realized.

Jazz Loving
Our worship is joyful, vibrant and filled with fabulous music. Folks often say that Sunday worship at Plymouth is one of the best concerts they’ve ever attended! Our congregation includes some of the Bay Area’s most celebrated jazz and blues musicians, and their gifted artistry is the heartbeat of our Sunday morning worship.

Diverse And Inclusive
Our congregation reflects the diversity of the Bay Area -- our community includes people of African American, Latino/a, European and Asian American heritage; queer, trans, straight, and cis people; single folks, couples, and families of all shapes and sizes; people who are wild about Jesus and people who aren't so sure what they believe, but seeking spiritual community. At Plymouth, you're welcome not in spite of but because of your unique story.