An Evening of Performance and Poetry with
James Cagney, Matt Jaffe and Matt Sedillo.
Curated by Kimi Sugioka
Open Microphone to Follow 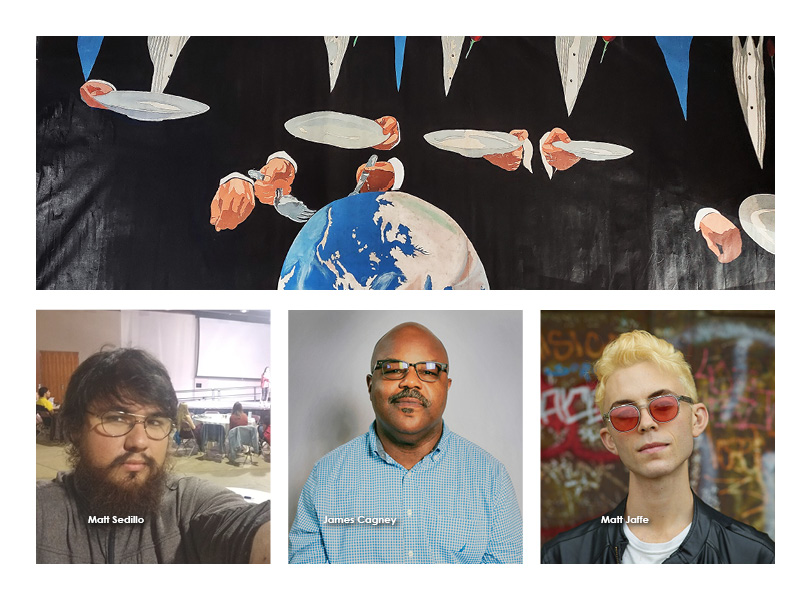 About the Artists
James Cagney
James Cagney is the author of Black Steel Magnolias In The Hour Of Chaos Theory, winner of the PEN Oakland 2018 Josephine Miles Award. His newest book, Martian: The Saint of Loneliness is the winner of the 2021 James Laughlin Award from the Academy of American Poets. It is due from Nomadic Press in 2022. For more information, please visit JamesCagneypoet.com

Matt Jaffe
After cutting his teeth on open mics around the Bay Area, San Francisco songwriter Matt Jaffe was discovered by Jerry Harrison of Talking Heads. Together, they produced his first album at the age of 16, cementing Matt's dedication to music. Soon, he formed a band, dropped out of college, and has not looked back. Since then, Matt has written more songs than he can remember the words to, crisscrossed the country opening for Mavis Staples and Wilco, and co-written with Tom Higgenson of the Plain White T's. Inspired by the great lineage of rock n' roll, he marries literary lyrics with the undeniable urge to dance. Having suffered from seizures since 2015, Matt also uses his music to unite local and national epilepsy communities. Matt is currently rolling out his fourth and fifth albums, Undertoad and Kintsugi.

Matt Sedillo
Matt Sedillo has been described as the “best political poet in America” as well as “the poet laureate of the struggle” by academics, poets, and journalists alike. He has appeared on CSPAN and has been featured in the Los Angeles Times, among other publications. He has spoken at Casa de las Americas in Havana, Cuba, at numerous conferences and forums such as the National Conference on Race & Ethnicity in American Higher Education, and at over a hundred universities and colleges, including the University of Cambridge.