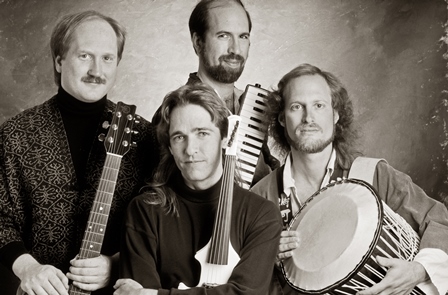 This lineup of Ancient Future that performed on the band's influential World Without Walls recording features Matthew Montfort on scalloped fretboard guitar, Jim Hurley on violin, Doug McKeehan on keyboards, and Ian Dogole on percussion. In 2011, they reunited to perform concerts at venues from Yoshi's in San Francisco to the Frick Museum in Pittsburgh, Pennsylvania. In honor of the reunion, World Without Walls was re-released digitally by Capitol Records. Twenty two years after its initial release in 1990, broadcasters worldwide voted the record as one of the top 5 world music releases of 2012.

Matthew Montfort is the leader of Ancient Future. He is pioneer of the scalloped fretboard guitar (an instrument combining qualities of the South Indian vina and the steel string guitar), and studied with vina master K.S. Subramanian in order to fully apply the note-bending techniques to the guitar. In 2009, he released his first solo guitar recording, Seven Serenades for Scalloped Fretboard Guitar, which reached #8 on Zone Music Reporter's World Radio Chart. He is recognized as one of the world's 100 Greatest Acoustic Guitarists by DigitalDreamDoor.com, a curated "best of" site, and has been featured in Guitar Player Magazine. He has performed concerts worldwide, and live on national radio and TV shows such as the Rachel Maddow Show on MSNBC. Montfort wrote the book Ancient Traditions - Future Possibilities: Rhythmic Training Through the Traditions of Africa, Bali, and India, which has been used by many musicians to improve their rhythm skills.

Doug McKeehan started his piano studies at age five, and began his first professional work at the age of twelve. He studied music at the Oberlin Conservatory, Kent State University, and the University of Otago (New Zealand). He has toured Europe twice and spent considerable time in India studying with notable Indian music teachers such as Pandit Ram Narayan, Ustad Kursheed Khan and Pandit A.G. Bhattacharya. He has composed original music for stage and T.V. productions in San Francisco and Los Angeles and has been musical director of two original musical comedy productions. In 2008 he was commissioned to compose and perform live music for the Diablo Ballet's production Jazz Fever. He cofounded Air Craft with violinist Bruce Bowers, which released a highly acclaimed jazz fusion album, So Near, So Far. He is a first call jazz pianist in the San Francisco Bay Area. Since joining Ancient Future in 1985, he has performed hundreds of concerts with the band.

"Ian Dogole has articulated his vision of global fusion music as a multi percussionist, bandleader, educator, recording artist, composer and producer. He has released seven records and a DVD as a leader – Along the Route, Dangerous Ground, Ionospheres, Night Harvest, Convergence, Crossroads, Outside the Box – Jazz Journeys & Worlds Beyond and Ian Dogole & Hemispheres In Concert (DVD). Ian has recorded and performed with artists such as Hamza el Din, Tito La Rosa, Richie Cole, Paul McCandless and Alex de Grassi. He performs on a wide variety of percussion instruments, including udu, cajon, hang, African talking drum, kalimbas, cymbals and dumbek. Since joining Ancient Future in 1985, he has performed hundreds of concerts with the band.