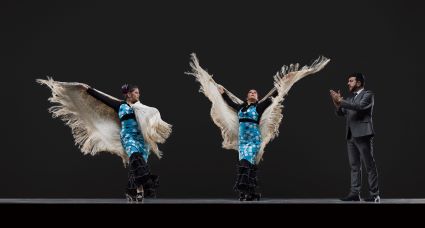 Caminos Flamencos presents "Flamenco Generation XYZ" is a show that provides a platform of artistic expression for up and coming flamenco dancers and musicians who have adopted the culture, professionality and mantle as the next generation of flamenco in the U.S., in a collaboration between Artistic Directors, the Emmy Award winning choreographer Yaelisa and extraordinary guitarist Jason McGuire. All dancers and musicians in this performance will work closely alongside Caminos Flamencos to present their art and immersion in a culture that is foreign to the, while showcasing the strength of the survival of an art form that continues to fluorish locally and throughout the Americas.

Yaelisa was surrounded from birth by the rhythms, gestures and vocal laments of the art in its purest form, where her unique improvisational abilities began to flourish. At age 4, she danced on the stage of the famous Casa Madrid, and her immersion in flamenco culture became a part of her life because of her mother, the renowned singer/dancer Isa Mura. Since 1986, Yaelisa has spent extensive periods of time living and performing in Spain, presenting her choreography there and in the U.S. She is the recipient of an Emmy Award for Choreography in 1993 and an NEA Choreography Fellowship. Yaelisa is the co-founder and Artistic Director of the New World Flamenco Festival in Irvine, California. Internationally recognized as a master teacher, Yaelisa has developed a teaching style that emphasizes cultural understanding and knowledge of the cante.

Flamenco guitarist Jason McGuire “El Rubio” began playing at the age of nine. He received formal training in Dallas, Texas from the Booker T. Washington High School for the Performing and Visual Arts. While in high school he was given the prestigious ""DEE-BEE"" award from Down Beat magazine in the category of ""Instrumental Jazz Soloist"" and later was one of four finalists in the 1988 American String Teachers Association (ASTA) National Classic Guitar Competition. He began performing as a flamenco guitarist in New York playing alongside the legendary Pedro Cortes Jr. In 1995, Jason recorded with famed Gypsy guitarist Carlos Heredia on his CD ""Gypsy Flamenco,"" and released a recording of his own composition "Distancias." Jason currently serves as Music Director for both Caminos Flamencos and The New World Flamenco Festival. He is also an accomplished recording engineer and producer.