Special Symposium: Arts and the Environment 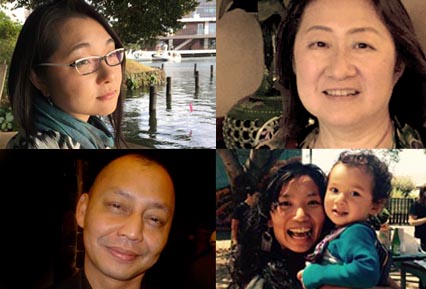 An opportunity to hear from and discuss with artists and activists who have been addressing the issues of environmental justice and anthropocentrism through their aesthetics, process, expressions and actions. Speakers include Tomoko Momiyama, Naoko Nakasone, Ledoh and Kana Koa Weaver. The forum will conclude with a 15-minute outdoor ritual performance by special guests, honoring seeds and grains.

Tomoko Momiyama
Tokyo based Tomoko Momiyama works internationally as a music composer, dramaturg, and producer of multi-disciplinary art events, installations, and performances. She graduated from Stanford University in the U.S. with B.A. in Music and Human Biology and further studied composition at the Royal Conservatory of the Netherlands in The Hague under the Japanese Government Overseas Study Programme for Artists. Tomoko’s works, many of which are community-based and site-specific, have been performed throughout Japan, as well as in different parts of Asia, Europe, North and Central Americas, and Africa.

Kana Koa Weaver
Kana Koa Weaver is a seed saver / scholar-activist based in Berkeley, California. Kana travels across Japan, Hawaii’i and US to inherit traditional wisdom on seeds and farming. She provides lectures and workshops on seed stewardship, writes and translates about seeds, farming and food movements, and provides tours. Her latest translation work: Political Dynamics of Transnational Agrarian Movements was published in Japan in 2018 (English to Japanese). Kana received MA in Agrarian and Environmental Studies from International Institute of Social Studies the Hague, Erasmus University in Netherlands. She is the mother of a 3 years old.

Ledoh
Ledoh is an internationally-renowned choreographer and performance artist. Ledoh trained in Japan under Butoh Master Katsura Kan (member of the radical 70s collective BYAAKOSHA), and has since electrified audiences around the globe for over 15 years with his riveting solo and ensemble performances. Born into the Ka-Ren hilltribe, Ledoh came to America at age 11 to escape the oppression of his people by the brutal dictatorship holding power in Burma. As Artistic Director of SALT FARM, Ledoh choreographs with a raw movement vocabulary and directs the production of sets, video art, and musical scores to create a vital, visceral brand of live theater and site-specific installations that can soothe then shock within the span of a timeless moment.

U.S./Japan Cultural Trade Network (CTN)
CTN was founded as an international project of Arts Midwest, headquartered in Minneapolis, MN in 2001 to provide leadership, vision, information and support to enhance cultural trade between the U.S. and Japan. Under the leadership of its founding director, Kyoko Yoshida, CTN has designed and implemented a number of exemplary exchange projects with an array of committed partners and participants, developed long-term relationships and broadened the knowledge within the professional community about artistic resources and practices in both countries. After its successful and productive operation of five years in the Midwest, CTN relocated to the Pacific-rim city of San Francisco in 2006 to become an independent nonprofit organization.