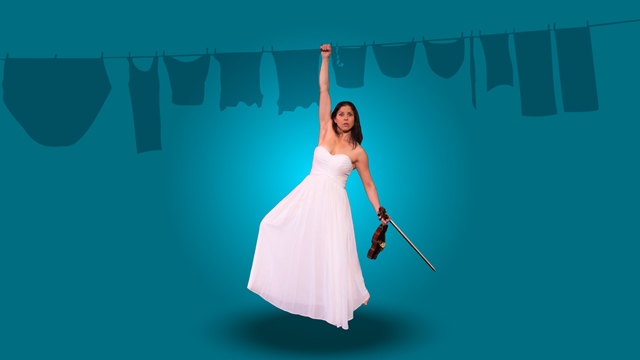 Cara Vita: A Clown Concerto is a solo theatrical clown piece which explores the joys, sorrows, and hilarity of romance, relationships, and child-rearing. Created and performed by Felicity Hesed, this comedy offers a uniquely female perspective on the struggles of maintaining one’s identity in the midst of family life. Cara Vita: A Clown Concerto incorporates music, acrobatics, and magic to spin a whimsical tale of love and loss.

Felicity Hesed
Felicity Hesed is a Clown, Aerialist, and Director. She recently returned from Kaifeng, China where she was a featured performer at the Tenth National Golden Chrysanthemum Festival. Felicity delights and surprises viewers with her vibrant characters, technical skill, and audience interaction. Felicity has developed a unique style of clowning that incorporates acrobatic prowess, physical comedy, and theatrical storytelling. Felicity received a BA in Theater from Kalamazoo College and attended the Clown Conservatory. Felicity’s circus and clowning credits include the New Pickle Circus, Teatro ZinZanni, Children’s Fairyland, the Circus Center Cabaret, the San Francisco Aerial Arts Festival, and Seattle’s Moisture Festival.

Jeff Raz
Jeff Raz has starred in many plays and circuses, from Corteo with Cirque du Soleil to Comedy of Errors on Broadway. He is a graduate of Dell’Arte International, has written 15 plays and directed dozens of circus and theater productions. His first book, The Secret Life of Clowns, was launched nationally at the Smithsonian last year; his new book The Snow Clown is now available at jeffraz.com.

Clare Armenante
Clare Armenante is a versatile violinist and fiddler with a passion for all music – any style, any genre. She currently performs, records, and tours with two bands: The High Water Line (bluegrass) and The Vivants (western swing/Cajun). She also performs as a member of the hip-hop chamber group, Ensemble Mik Nawooj, and other string quartets in the Bay Area. Her skills in many genres of music have given her the opportunity to travel and perform at Carnegie Hall, Bill Graham Civic Auditorium with Bonobo, SF Masonic Auditorium with Sarah Brightman, The Oracle Arena with Michael Buble, and TedX Oakland. Clare received her M.M from the San Francisco Conservatory of Music and her B.M. at Vanderbilt University.