Our concert on Saturday May 23 is sold out. Mahsa and Marjan Vahdat are also performing in San Francisco this month as part of the Armine, Sister project with Teatr ZAR. Please follow this link for more information.


Presented by Teatr ZAR and SFIAF

This performance by the Vahdat Sisters was made possible in part by the Koret Foundation, the City of Wroclaw, the Western Arts Federation, the Polish Cultural Institute in New York and the Polish Consulate in Los Angeles. 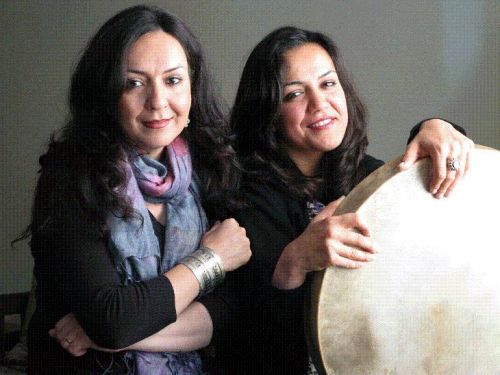 Mahsa and Marjan Vahdat reflect the evolution of Persian singing. University-educated and completely devoted to their artistic cause, they belong to a new generation of musicians. They continue a tradition that faces problems of identity in today’s Iran. Persian music has the capacity to constantly renew itself, a phenomenon unique to the East. As well as having a history of “faithful” transmission, it also has authenticity of emotion. Thanks to its mystical heritage, it is able to retain a feeling of nobility and depth that one could call oriental chivalrous, melancholic romanticism. This heritage is wonderfully portrayed by Mahsa and Marjan Vahdat. The two sisters take Persian poetry to new heights and to new spaces. Their voices soar and intertwine creating a new sonic landscape. Their songs describe the joys, sorrows, hopes, longings and loves of Iranian people. Without being visible in Iran, the sisters have permanent contact with a large appreciative audience around the world.

Teatr ZAR is the resident company at the Grotowski Institute. The company emulates Jerzy Grotowski’s ethos of ensemble work and develops its productions through a process of creating its own theatrical language. A language that, like Grotowski’s in the last years of his life, utilizes Eastern Orthodox music as a source for the creation of a performance that seeks to recreate the very roots of theatre.

The company is a multinational group that was formed during annual research expeditions to Georgia between 1999 and 2003. During these expeditions, they collected much musical material, including a core of centuries-old polyphonic songs that have their roots in the beginning of the human era and are probably the oldest forms of polyphony in the world. Zar is a name of funeral songs performed by the Svaneti tribe who inhabit the high regions of the Caucasus in north-west Georgia. Teatr ZAR attempts to demonstrate that theatre does not only relate to thea (Greek for seeing) but it is something that above all should be heard.