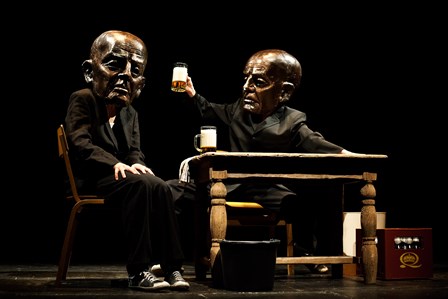 Two female performers toy with gender and espionage from behind masks in a deeply satirical re-imagining of Vaclav Havel’s best known play, Audience. Spitfire’s unique style of theatre - an explosive mix of absurd humour, physical theatre and acting with masks - is the key to this unexpected interpretation of Audience.

The play takes place in a small Czech brewery in 1975, where Vanek, a struggling playwright censored by the Communist regime (a barely-veiled characterization of Vaclav Havel himself), must work to support himself. It becomes apparent that Vanek’s superior has been enlisted to spy on him, a situation which unravels into a comic entanglement of espionage and deceit, with many a beer consumed.

The Spitfire Company cast female performers in the two male roles, with the characters defined by masks reminiscent of haggard politicians. Little is spoken in this physical piece, often morphing into comedy as the two performers drink beer after beer live through the show.

Immediately after its premiere in September 2013, Antiwords became an international smash hit and is currently the most staged adaptation of Havel's work in the world. The absurd magic of Antiwords has been enjoyed by audiences across three continents in cities including Washington DC, New York City, Beijing, Seoul, Busan, Milan, Oslo, Krakow, Florence, Berlin, London and Prague.

“Performers, along with director Petr Boháč, have made a radical contribution to the discussion about how to perform Havel's plays today.” (Marie Resslová, Hospodarske noviny/newspaper)

Spitfire Company
Spitfire Company is an artistic company that includes works of physical, visual and dance theatre. It is currently one of the most progressive ensambles of author theatre in the Czech Republic. The most important and characteristic aspects of the ensemble´s work are: searching of an original physical language of each particular performance, emphasis on experiencing performer´s state of being that generates very present emotions, dealing with a human´s limitation and his/her existential situation.

Petr Boháč (Director)
Petr is the artistic director and co- founder of Spitfire Company. He is also guest director of Tantehorse (company of new physical mime, dance and multimedia) and performing arts programmer of the venue Palác Akropolis. His work with these companies has been presented in over eleven European countries, the United States and Africa. Mr. Boháč is also founder of The International Festival Zero Point, which brings the best of physical, mime, visual and multi-genres theatre forms to Prague. His performances received several prestigious awards as: Herald Angel Award and Total Theatre Award (nomination) at Edinburgh Fringe, Outstanding Performance Award at Prague Fringe, the Next Wave Festival Award for the Personality of the Year, the Award of Czech Theatre Times for the Personality of the Year at category Alternative Theater and several others.

Eva Stará (Performer)
Eva Stará studied acting at the Duncan Centre Conservatory and non-verbal theatre at the Music Academy of Prague. As a choreographer or performer she has taken part in Festivals New Europe 2013, Letní Letná, Tanec Praha, Czech Dance Platform, Fun Fatale, Cirkuff and others. She has also participated in creating children productions with Lenka Tretiagová in Studio Light. As a performer, she collaborates with Spitfire Company, Tantehorse, Burki&com and others. She is founding member of Holektiv - group combining dance, physical theater and new circus.

Michaela Hradecká (Performer)
Michaela Hradecká is a freelance actress,puppeteer, mime and performing arts professional from the Czech Republic. She graduated from The College of Higher Education in Performing Arts in the field of Puppetry (under the tutelage of Vít Brukner) and then continued her education at the Czech Music Academy (HAMU), majoring in pantomime and clown techniques (under the tutelage of Boris Hybner). Michaela has been involved in many projects and artistic groups, both as a performer and an author (or a co-choreographer). For example, Michaela is a co-founder and an art director of women´s pantomime group The Mime fatale. As a clown, she mainly performs with The Sacra Circus. Besides puppeteering and pantomime, she also loves genres of street theater and new circus. You can see her performing with The Amanitas Fire Theatre, The Kvelb Theatre or The Fireducks.

Jindřiška Křivánková (Performer)
Jindřiška Křivánková is an actress, dancer, choreographer, mime and author with strong interest in the development of contemporary theater performances. She finished her studies at Dance Conservatory Duncan Center in Prague and the Academy of Performing Arts in Prague, with M.A. degree. Since 2002 she started her professional career as an actress and author. In 2008 she became one of the founding member of Spitfire Company, company of physical theater, where she performs until now. She´s co-founder of Kolonie o.s., theater company constantly working in Praque. She was awarded as the Talent of the Year (2010) at the Next Wave festival in Czech Republic.