Produced by:
We Players 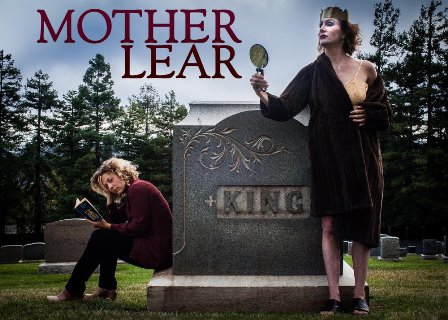 A moving production about a middle-aged woman who navigates dementia with the help of her daughter - communicating only through the language of Shakespeare's King Lear. Cordelia and her mother, a former Shakespeare scholar and proud matriarch, confront dementia, loss, and fraught family dynamics armed with humor, compassion, and the poetry of Shakespeare. This potent two-woman production is followed by a facilitated discussion exploring the themes of aging, dementia, care-giving, and end of life.

We Players
We Players is the San Francisco Bay Area’s premiere site-specific theatre company. Founded in 2000, We Players creates stunning productions that are intimate and interactive - stimulating all of the senses through the dynamic in-situ staging. Projects take place in national and state parks, drawing thousands of diverse young people and adults to these special sites each year - many for the very first time. We Players productions have received local and national recognition for their ground-breaking approach. Performances often have audience members on their feet as they follow the performers through the site, exploring the landscape and connecting to the physical environment through impeccable design, superb acting, and thought-provoking adaptations of classical texts. These site-integrated performances transform precious public places into inspired landscapes where classical antiquity and modern truth synthesize.

Ava Roy
Ava Roy is the Founding Artistic Director of We Players. Her unique style of interactive, site-integrated performance aims to highlight the historical and natural treasures of the local landscape and encourage new ways of experiencing and appreciating these places. She is an alumna of Stanford University, where she founded We Players in the spring of 2000. She holds a BA in a self-designed major: Ritual and Performance in Aesthetic Education, 2003. Since 2008, she has pioneered unique partnerships with both the National Park Service and the California State Park system, creating large-scale performances at park sites throughout the Bay Area. Inspired and guided by Shakespeare since her teenage years, Ava has explored many characters from the canon ranging from Juliet to Henry V, Mercutio to Lady Macbeth. In addition to her love of Shakespeare, classic literature, historic sites, crumbling buildings, and majestic natural landscapes, Ava likes espresso, salt spray, and sunshine. She is a yoga teacher, a sailor, and in her next life, plans to live in the ocean.

Courtney Walsh
Courtney Walsh is delighted to return to the incomparable We Players. After earning a B.A. in Theater Studies at Yale University, she acted professionally in Los Angeles. During an acting hiatus, she earned a law degree to represent children in child abuse cases, returning to the stage in 2006. Since then, she has appeared on national and international stages, both in English and French (including Berlin, Amsterdam, Paris, Montpellier, Cardiff, Athens, Corfu, Sydney, and Auckland). Bay Area credits include: Cutting Ball Theater (title role in Phèdre); Marin Theatre Company (Native Son – West Coast premiere); San Francisco Playhouse (Jerusalem, and Seared – world premiere); We Players (Romeo and Juliet); New Conservatory Theatre Center (Dear Harvey), and many others. For Moby Dick – Rehearsed at Stanford Repertory Theater (where she has been a core company member for ten years) she won Theatre Bay Area Awards for Outstanding Production, Directing and Acting Ensemble. Her solo show Clytemnestra: Tangled Justice has toured eight countries over three continents. Courtney periodically teaches a CSP Drama course at Stanford University and workshops on acting in the U.S. and Europe. She is also a mother of four and a competitive equestrienne. Find her at courtneywalsh.net