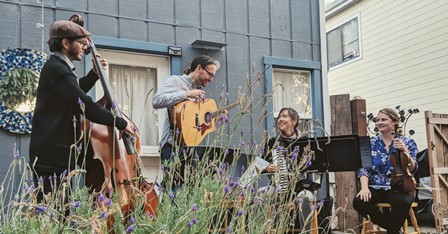 Diana Strong
Oakland native Diana Strong started her musical training with classical piano at age 7, grew up going to folk music camps, and discovered the accordion in 2006. She has studied with Dan Cantrell and Vitor Gonçalves, performs regularly with Dona Francisca (Brazilian forró), released a 2012 album and toured the Northwest with Sweet Moments of Confusion (with cellist Myra Joy), and has performed with numerous ensembles from klezmer to modern opera. Her favorite music always defies categorization. In addition to performing, Diana teaches elementary Orff music programs in two schools as well as private lessons.

Travis W. Hendrix
Travis is a Bay Area-based multi-instrumentalist, composer, and sound designer. He has been mentored by many great musicians, including clarinetist and composer Ben Goldberg. Throughout his diverse career Travis has performed throughout the U.S. and Canada, composed music for games and short films, designed sounds for everything from music production software to digital cameras, and arranged and performed for theater works including Paula Vogel's Tony-Award-winning play Indecent. Based in Oakland CA, he plays upright bass and clarinet with various Eastern European and jazz ensembles and continues to compose for games and films.

Christopher Jacoby
Christopher is a multi-genre, multi-instrumentalist with a Masters in Music Technology from NYU. From concert band or electronic interpretations of traditional folk music, to singing early music or choral harmonies from the Republic of Georgia, to studying composition with Oscar Bettison and Morton Subotnik, he has charted an idiosyncratic course through the full range of musical expression. He currently lives in Oakland, CA with his wife, a number of house plants, and too many instruments.

Audrey Knuth
Audrey was raised in Honolulu and moved to Boston in 2008 to attend Berklee College of Music and explore the thriving New England folk scene. After graduating, Audrey made a name for herself as a dance fiddler specializing in New England, Celtic and Old Time tunes. She has spent the last 5 years traveling full-time throughout the US and Europe with her bands Wake Up Robin, The Gaslight Tinkers and her duo with Larry Unger. Now based in Oakland, Audrey is expanding her repertoire and thoroughly enjoying the music life the Bay has to offer.

Aziz Yehia
Aziz was raised a rhythmist in LA. As a cultural anthropology student at UC Berkeley, he studied musical community building in Rio de Janeiro’s choro scene--returning with both pandeiro abilities and a deepened relationship with music’s social power. Other playing experience spans Middle-Eastern, gospel, fringe jazz, cumbia, classical and rock. Aziz performs regularly and works as a multi-instrumental music teacher. Last summer Aziz toured with the Biketopia Music Collective, playing with four bands as they towed a drum set and pedal powered sound system by bicycle from Olympia, WA to the Bay Area.