Presented in Arabic with English Super-titles 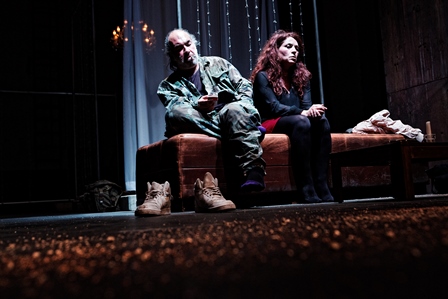 For More Details on the Cancellation See Press Release HERE

In Your Love is Fire the Syrian author Mudar Alhaggi deals with his personal experiences of the war in Syria, the loss of his home country and being exiled in Germany. Neither hero nor victim story, it is a psychological drama that portrays the behavior of those in Syria – who wait silently.

The play focuses on four central figures, three of whom are trapped in Damascus. The fourth, a refugee author living in Europe, plays with the fates of his characters and leaves them in an almost surreal state of limbo that mirrors the Syrian reality. Hala tells Rand that she will leave Syria because of the war and flee to Germany. Rand is desperate for the loss of her friend, but she feels she cannot leave Damascus, nor does she want to. In the midst of the war she has begun a love affair with Khaldoun, who executes his military service as a soldier at the checkpoints of the Syrian regime army.

Collective Ma'louba
Collective Ma’louba is a Syrian, Arabic-speaking artist and theatre collective, which is currently in residence at Theater an der Ruhr in Mülheim, Germany. In its theatre productions, Collective Ma’louba questions the political and social condition of the Arab world against the background of recent rebellions and penetrates the taboos of Syrian and Arab society. Further artistic projects of thematic relevance such as installations, exhibitions and workshops accompany the theatre productions. These are shown in the North Rhine – Westphalia region, throughout Germany and abroad, thus creating transnational meeting places. The events are realized in Arabic with English subtitles.

Mudar Alhaggi (Author)
Mudar Alhaggi studied theatre sciences at HIDA in Damascus. Alhaggi works as an author and dramaturge, he writes for the radio and TV, pens scripts and leads writing workshops for refugees. He has written five plays, staged “Footfalls” by Samuel Beckett and the production “One Thousand and One Tents”, which was developed in a workshop with refugees in Lebanon. He worked at theaters in Oberhausen, Berlin, Bern and Graz. In 2017 he co-founded the artist collaboration Collective Ma'louba and wrote and directed its last production DAYS IN THE SUN. Mudar Alhaggi lives in Berlin.

Rafat Alzakout (Director)
Rafat Alzakout graduated from the Higher Institute of Dramatic Arts in Damascus in 2003 and works as a director and actor. In 2010/11, he successfully staged Edward Albee's "Zoo Story“, in which he also performed. He directed the 30-part satirical, critically acclaimed puppet theater series "Top Goon" under the pseudonym Jameel Al Abiad, which he showed on the Internet until 2015. These videos were included in exhibitions in the Victoria & Albert Museum London (2013), at the Paris Institute Du Monde Arabe (2014), at the Rotterdam Film Festival 2012 and at the 2013 Moscow Biennale. His documentary "Home" premiered at the Festival FID Marseille 2015 and has been screened at numerous international film festivals. “Your Love is Fire” marked his directorial debut with Collective Ma’louba.

Amal Omran (Actress)
Amal Omran is regarded one of the most accomplished actresses in the Arabic world. She graduated from HIDA in Damaskus in 1989. She worked with Ariane Mnoushkine i.a. on the play „Gilgamish“. Furthermore did she work with director Sulayman al Bassam on “Richard III – an Arab Tragedy“ (2007) and “The Speaker’s Progress“ (2011), which were presented at the Holland Festival, the Royal Shakespeare Company, in New York, Boston and Tokyo. She worked with director Tim Supple in the project “One Thousand and One Nights“, which was presented at Edinburgh Festival a.o. She has been a member of Collective Ma'louba since 2017.

Mohamad Al Rashi (Actor)
Mohamad is an actor, director and musician. He graduated from the Higher Institute of Dramatic Arts of Damascus in 1995. Since the end of 2014 he resides in Marseille, France. Mohamad has acted in about twenty TV movies and in film and is also a founding member of the association "Damascus Theater Laboratory“. His recent performances include: 2016 "While I was waiting" by Mohammad Al Attar, staged by Omar Abussada. 2017 "Your love is Fire" by Mudar Alhaggi staged by Rafat Alzakout. 2018 "UR" written and directed by Suleiman Al Bassam and staged in Munich and Carthage Theater Festival in Tunis.

Moayad Roumieh (Actor)
Moayad graduated from the Higher Institute of Dramatic Arts of Damascus in 2009 and is an actor mainly working in movies and theatre. His recent works include: 2016 "While I was waiting" by Mohammad Al Attar, staged by Omar Abussada. 2017 "Your love is Fire" by Mudar Alhaggi staged by Rafat Alzakout. 2018 “Days in the Sun“ written and directed by Mudar Alhaggi.

Immanuel Bartz (Producer / Dramaturge)
Immanuel has worked with the directors Johannes Conen, Albrecht Hirche, Jo Fabian, Sandra Reitmayer and Charlotte Sprenger at the Grand Théâtre de Luxembourg, Stadttheater Fürth, Theater an der Ruhr, Neue Theater Halle, Staatstheater Stuttgart, Staatstheater Cottbus, Dock11/Eden***** Berlin and Theater der Keller Cologne. In 2011 he co-directed with Sebastian Bolitz “Ein Hungerkünstler“ based on the story of Franz Kafka. 2014 his directorial work RADAR was shown at FFT Düsseldorf, FWT Köln and at TUFA Trier. 2015 RADAR was invited to the international theatre festival SKUPI in Macedonia. In 2016 Bartz was a dramaturge at the Theater der Keller. Since 2017 he is a producer and dramaturge with Collective Ma’louba.