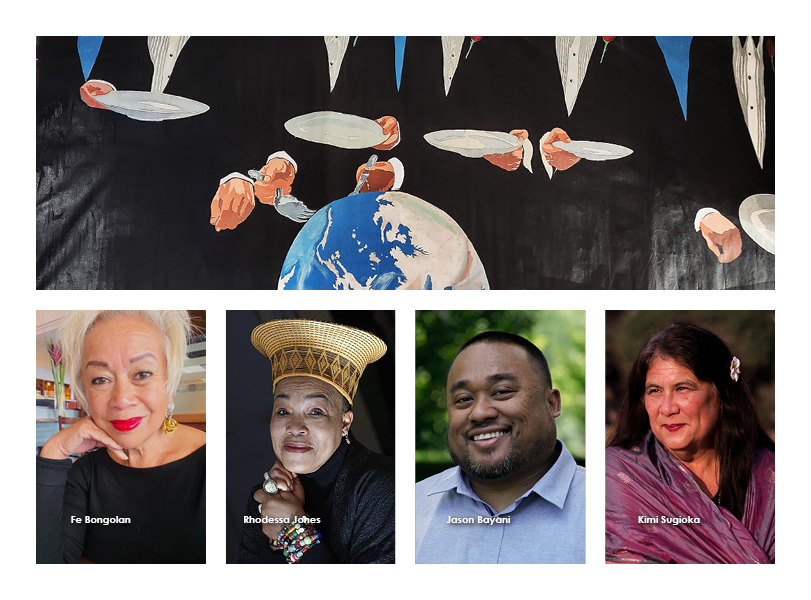 We are pleased to announce that we have installed The Last Supper Party at 1222 Sutter Street as a poignant reminder that (as Fe points out), even though times change, they also stay the same -- and the struggle continues.

To that end, Saturday April 2 will serve a dual purpose: the occasion will celebrate the opening of the Festival's new office with the re-unveiling of Fe's seminal work of art. It will also segue into the inaugural poetry and performance evening of the same name.

We invite members of the public to meet the artist(s), view the newly installed work and raise a glass between 6:00pm and 7:00pm. At 7:00pm, Rhodessa Jones will read excerpts from a new performance piece. Following Ms. Jones, poet, author and educator Jason Bayani will read from his published texts as well as other original material. The evening will conclude with Alameda Poet Laureate and SFIAF board member, Kimi Sugioka reading from her work.

The Story of The Last Supper Party Painting

“1985. Ronald Reagan was still President. The global movement to end apartheid and free Nelson Mandela from Robben Island Prison was underway. In San Francisco homelessness was ramping up. The AIDS pandemic was taking down swaths of our city’s population: friends, family, and co-workers. Yet a whole other world of class and wealth did nothing while the rest of our world was in trouble. Sitting in my studio in an Inverness cabin, I stayed with my paints and let something happen. It was there that I found my artist’s voice to not attack directly, but to let the exposure of that apathy – bred by a society that embraced greed over humanity—do the work.

Thirty six years later, with all that has changed and not changed, it is painfully unsurprising that this painting still shouts.” ~ Fe Bongolan

Fe Bongolan
Fe Bongolan is a Bay Area visual and performing artist. She is an alumnae of San Francisco State University with a Bachelor’s degree in Crafts and Design. She found theater arts in her last year at SFSU, and to this day it consumes her life. After working as an actress with Asian American Theater Company and Teatro Campesino, in 1992 she began work with the Medea Project: Theater for Incarcerated Women, immediately involved as an artist from the community working alongside Rhodessa Jones in helping women inmates from San Francisco County Jail write their stories for performance. In 28 years with the Medea Project, Fe developed as actor, writer, dramaturge and assistant director to Rhodessa, helping inmates and ex-offenders find their voice and develop their writing for performance in jail, the community and main stage. In her words, “Even in my visual art works, I was searching for the path to explore making art that had vital meaning and impact on the world. For me as a performer it was with the Medea Project that I found that road.”

Kimi Sugioka
Kimi Sugioka is a poet, songwriter, and educator. She is the current Poet Laureate for the City of Alameda, a post that includes creating platforms for the presentation of a diverse variety of poets and spoken-word artists. Kimi also performs her own work frequently throughout the Bay Area. Born in Chapel Hill, North Carolina and raised in Berkeley, California, Kimi has worked in public education for decades, and earned her BA from San Francisco State University and MFA from the Naropa Institute in Boulder, Colorado.